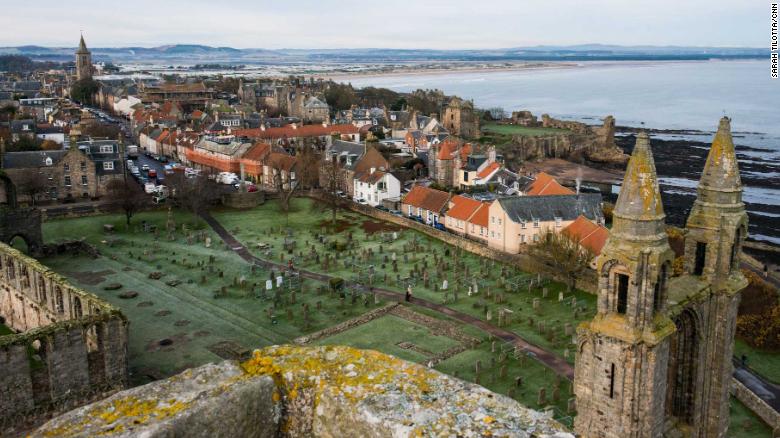 A view from St Rule’s Tower overlooks the town of St Andrews, Scotland.

St Andrews, Scotland —It’s a bitterly cold November day in the Scottish town of St Andrews, the kind of morning when the grass crackles underfoot like broken glass.

Undeterred, tourists swaddled in puffer jackets and armed with selfie sticks ascend the cathedral tower that has overlooked this coastal spot for 800 years.

From the top, gazing in one direction, the sea stretches towards Europe. Looking the other way, rolling hills lead to England.

As the United Kingdom faces its most momentous election in recent history, Scotland is grappling with which view to set its sights on.

For Scottish voters, a key issue in the December 12 general election will be whether, in the long term, they want to remain part of the UK or to break away and become an independent country.

“Independence is not about ‘oh we hate the English,’” says 22-year-old Scot and pro-independence campaigner Iona Fraser-Collins. “It’s about us wanting to be in charge of our own laws, and England being in charge of its own laws.”

Scotland rejected independence at a 2014 referendum, 55% to 45%. But circumstances have changed dramatically since then, according to the Scottish National Party (SNP) — the third-largest party in the UK Parliament.

In 2016 Scotsvoted overwhelmingly to remain in the European Union. Instead, they got Brexit – setting the country on a path it hadn’t agreed to and re-energizing the fight for independence.

In the event of a hung parliament –- one in which no party secures an outright majority — the pro-independence SNP could play kingmaker, potentially propping up a Labour government (they’ve dismissed the idea of doing the same with the Conservatives).

The SNP’s key condition for this would be securing a second Scottish independence referendum. It’s a prospect Labour hasn’t ruled out completely.

Support for Scottish independence has crept up slightly in the last five years and is nowneck-and-neck with those who favor remaining part of the union. With many seats in Scotland resting on razor-thin margins, this will be the scene of a fierce battle that could have major consequences for the future of the UK.

No battle will be fiercer than that fought in the constituency of North East Fife. This is the most marginal seat in the UK: In the 2017 election, the SNP won by just two votes against the Liberal Democrats.

Both the SNP and Lib Dems want to stop Brexit and both are fighting for pro-European voters. Their methods though, are starkly different.

The SNP believes an independent Scotland is the best way of staying in the EU; the Lib Dems say Scotland is stronger in Europeand in the UK.

The SNP currently controls 35 of Scotland’s 59 constituencies -– every seat they could gain in this election would strengthen their negotiating hand for an independence referendum.

At the heart of North East Fife is the university town of St Andrews.

It’s best known abroad as the place where Prince William started dating Kate, and as the “home of golf” thanks to the 600-year-old course that dominates the rugged landscape.

The town’s prestigious university also has a reputation, Scottish commentators told CNN, as the place where wealthy English and American students go when they don’t get into Oxford or Cambridge.

Students loom large here; cycling down pretty streets and teeming out of grand stone university buildings. They gather outside cafes handing out political flyers, all too aware that in a constituency where just two votes decided the winner last time around, they could make all the difference.

“It’s pretty unusual for there to be an election during term time,” says the university’s student president, Jamie Rodney, who has been part of a campus-wide drive encouraging young people to register to vote. “So students have a real opportunity this year to potentially swing the result of the whole election.”

Some, like the university’spro-independence union, are adamant about the direction they want that swing to take.

Every Tuesday evening the students meet at one of the town’s many traditional pubs. They come armed with clipboards and political buttons, eschewing pints of beer for tea and Coca-Cola.

A handful of the group were too young to vote in the 2016 EU referendum. Even those who did vote Remain feel they’ve been flung under a Brexit bus that is beyond their control.

“Brexit is just a prime example of Scotland getting the exact opposite of what it voted for,” says 24-year-old Harry Stage, his black curls bobbing with emphasis.

“When your mandate is not accepted, or your people are not listened to, then how can you want to stay part of that union?”

The students say Scotland feels like a “second-class country” where Westminster overlords dictate everything from their finance to defense policies. “We want to sit next to England at the table,” says Stage, “rather than in the back taking the scraps they can throw.”

They point to the UK’s Trident nuclear weapons, carried by submarines based on Scotland’s west coast, as an example of the “double standards” and “condescending nature” of Westminster lawmakers towards their country.

“You couldn’t do it in the Thames (in London) because it’s too much of a threat to human life,” says Stage. “But what’s a trident bomb going to do amongst lochs and glens and Glasgow.”

Scotland’s first minister and the leader of the SNP, Nicola Sturgeon, has said scrapping Trident would be one of her party’s key demands if Labour wanted its support in a minority government.

It’s a demand that’s unlikely to be met. Labour has pledged to renew the Trident program, despite its leader Jeremy Corbyn being a longstanding critic of nuclear weapons.

Of course, there’s no guarantee that an independent Scotland would automatically be welcomed back into the EU. Experts have warned that Spain – which is facing its own Catalan independence movement – may veto any attempt by Scotland to rejoin the bloc.

Indeed, the St Andrews students said the Scottish independence movement as a whole had been “very supportive” of Catalan activists, flying their flags at rallies and vice versa.

Regardless, Sturgeon is confident an independent Scotland would be readmitted to the EU. Even its national deficit of 7% (EU member states must have deficits below 3%) wouldn’t hold Scotland back, she told the BBC during a live leaders’ debate last week.

Instead, she said, the deficit would drop under an independent Scotland finally able to fully control its finances.

In any case, “we won’t be in the EU come January,” says Stage, in between sips of tea. “So, what do we have to lose?”

In another pub down the road, the SNP incumbent in this constituency, Stephen Gethins, rearranges himself on a plush red barstool. Like his young supporters, he opts for a tall glass of water over anything stronger.

In the last election here in 2017 Gethins won by just two votes, following three recounts, and admits “there was quite a lot of stuff going on at the time” given his wife had just had their baby the week before.

This election, Gethins sticks closely to the SNP script, saying Scotland’s departure from the UK would be nothing like England’s shambolic exit from the EU.

“It’s Brexit which is isolationist, which takes us into the unknown,” says Gethins. The nitty-gritty of what an independent Scotland would actually look like – its currency and border controls — are all laid out in the SNP’s 650-page White Paper, he says.

Stronger in the union

On the other side of town, challenger and Lib Dem candidate Wendy Chamberlain is knocking on doors with her own small army of supporters.

Across Scotland, the Lib Dems’ vote share pales in comparison to that of the SNP – they hold just four of the country’s 59 seats, trailing behind the Conservatives and Labour.

This election, Chamberlain is banking on her party carving out a niche – attracting voters who want to stay in the EU, but don’t want a second referendum on Scottish independence.

Chamberlain’s biggest challenge may simply be convincing voters in her own home. Her husband is an SNP member, though she’s quick to laugh off politically-induced marital strife.

Among those hitting the pavements alongside Chamberlain are students Joseph Luke, 20, and Alex Whitman, 21. Both are English, which they say “lends itself to unionism a little bit.”

They now live in St Andrews and “just because we were born in England doesn’t mean we don’t get a say,” says Luke.

He has relatives in both countries and says he doesn’t want to cross a hard border “just to see my family.”

What makes elections in Scotland particularly nail-biting is the large proportion of marginal seats. Of the top 10 most marginal seats in the UK,four are in Scotland. Experts say that’s largely down to a four-party system not seen in England.

Even in a close constituency like North East Fife, some voters are still backing outside parties.

Student Lottie Doherty, 21, says she’ll be voting Labour because she supports staying in the EU and the UK, but believes the Lib Dem policy on revoking Brexit without a second referendum is “undemocratic.”

Labour came a distant fourth in the last election here. This year’s candidate, Wendy Haynes, says her party’s aim is to create a radically different UK, one that Scotland will want to be part of.

Meanwhile, kilt shop owner Robert Brown says he’ll be backing the Conservatives because they “support small businesses” like his. Most of Brown’s customers come from Scotland or America, where he says kilts are a popular choice for weddings.

He gets very little business from Europe, and he voted to Leave in the EU referendum. Despite the political turmoil of the ensuing three years, Brown believes Boris Johnson is the prime minister to finally deliver Brexit.

Surrounded by rows and rows of multicolored kilts, fox furs, and traditional silver brooches, Brown scoffs at the prospect of ever voting SNP.

Scotland isn’t traditional territory for the Conservatives. But in the last few years the party has made significant gains while Labour, which had triumphed here since the 1960s, lost huge swaths of voters to a reinvigorated SNP.

The Prime Minister is “easily portrayed as the cartoon character, Eton-educated toff who’s out of touch with the working class, and with the people of Scotland.”

But the “bottom line,” according to Miklinksi, is that a Conservative majority is the only way to resolve the “logjam in Westminster” and deliver Brexit. And ensure the SNP doesn’t get a second Scottish referendum.

With just over a week until the election, opinion polls are predicting a Conservative majority in the UK. That said, the polls predicted the same outcome in the 2017 election – instead, the Tories failed to achieve that majority.

Some, like 26-year-old fisherman Lee Gardner, still aren’t sure who they’ll vote for. Britain’s fishing industry has been vocal in favor of leaving the EU. Nonetheless Gardner voted Remain, and says he loves “traveling to Europe.”

“Anyway,” he adds with a cheeky smile, “I haven’t been a fisherman that long.”

Hauling lobsters onto his family’s boat in St Andrews’ harbor, Gardner stands on the cliff edge. Sea on one side, hills on the other, constantly moving between the two.

Soon, Scotland will decide which way to turn.